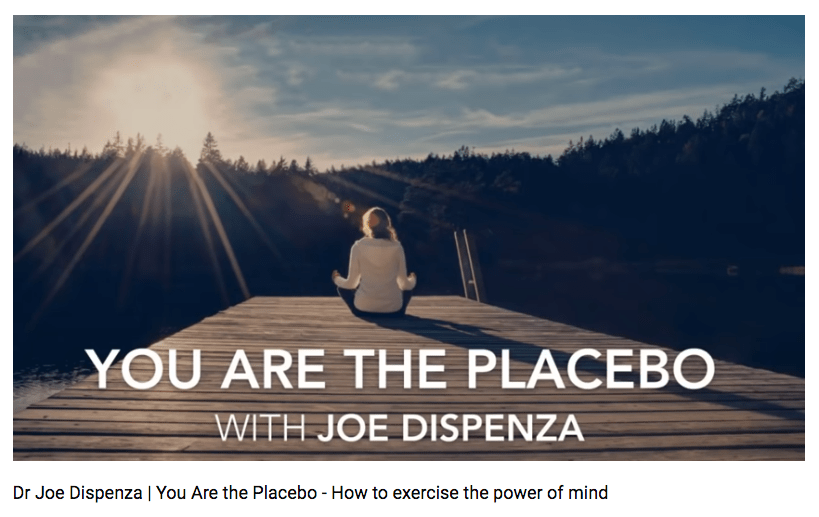 Anybody who works with me knows I’m fascinated by the brain. By how it works, and how to train it. So it makes sense that I would eventually find the work of Dr. Joe Dispenza.

Dr. Dispenza’s name popped up in my YouTube feed sometime in 2018, while my family was in the midst of some intense challenges. And I was instantly intrigued. For one thing, I’ve long been a fan of his colleague Gregg Braden‘s work at the crossroads of science and spirituality, and of his colleague Bruce Lipton’s important contributions to the new science of epigenetics.

Then I saw the title of Dr. Dispenza’s second book, You Are the Placebo. And boom! Lightning-strike. I had to get down into it and find out exactly what he’s up to.

Because I’ve always wondered why we humans have been so casual about the placebo effect. For example, check out this definition on merriam-webster.com:

1a.    A usually pharmacologically inert preparation prescribed more for the mental relief of the patient than for its actual effect on a disorder

1b.    An inert or innocuous substance used especially in controlled experiments testing the efficacy of another substance (such as a drug)

Really? A big piece of info is missing there. Because during drug trials in pharmaceutical research, a placebo always affects a statistically significant percentage of participants like an actual drug would. Again, and really think about this: the placebo has the effect on some folks that they expect the drug to have.

Whoa. Tell me that isn’t fascinating!

And what does it mean? And how can we humans harness whatever that’s about? Cut to the work of Dr. Joe Dispenza.